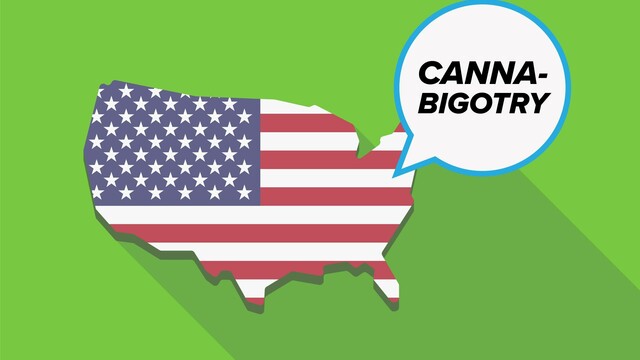 "Dozens of young White House staffers have been suspended, asked to resign or placed in a remote work program due to past marijuana use, frustrating staffers who were pleased by initial indications from the Biden administration that recreational use of cannabis would not be immediately disqualifying for would-be personnel, according to three people familiar with the situation.

The policy has even affected staffers whose marijuana use was exclusive to one of the 14 states—and the District of Columbia—where cannabis is legal. Sources familiar with the matter also said a number of young staffers were either put on probation or canned because they revealed they had used marijuana in the past in an official document they filled out for the position in the Biden White House during a lengthy background check."

These talented young people are now getting a taste of the cannabigotry people in our industry – and “out” cannabis users in general – experience on a daily basis.

Workers in cannabis businesses struggle to obtain health and life insurance, and in general are treated as a separate, unfavored class, subject to vicissitudes unique to this industry. As just one example, the State of Oregon allows the Department of Revenue, at its discretion, to go after the mere employees of a cannabis business for all of the business’s unpaid cannabis taxes. What other workers have to fear liability for their employer’s taxes? Imagine the surreal and hideous experience of opening up the mail and getting a notice from the Department of Revenue that you owe millions of dollars, just because you worked in a store that didn’t pay its taxes. Unfortunately, some people here in Oregon have actually had that experience and are living through it right now.

Cannabis businesses must deal solely in cash, and when they are robbed, law enforcement treats the victims like criminals. This year, Portland dispensaries were hit with a rash of armed, violent robberies, resulting in at least one shooting death, (Michael Arthur RIP), and hundreds of thousands of dollars in losses.

Cannabis businesses pay grossly inflated income taxes: they pay not on their net income, like all other businesses, but rather on their gross income, because the government still does not allow them to take normal business deductions. That’s right – the federal government may treat you like a subhuman because you use cannabis, but the IRS is happy to take billions of dollars in unfairly high-income taxes from people in the cannabis industry. As always, the hypocritical United States government is the primary financial beneficiary of the drug war.

Cannabigotry shows up everywhere. Doctors at the Veterans Administration take men and women who have bled and suffered for this country off their pain meds because they test positive for cannabis. Use cannabis and need an organ transplant? Forget it, you’ll be taken off the donation list. Live in a non-legal state and your child needs cannabis with THC for a medical condition? Uproot your family to a legal state or you will be imprisoned for child abuse.

Here is what cannabigotry means, and what it continues to mean in Biden’s America:

It means that if you use cannabis, you cannot be trusted to participate in the running of our country’s executive branch.

It means that if you use cannabis, you cannot be trusted with a security clearance.

It means that if you use cannabis, you are more likely to betray our country.

It means that if you use cannabis, you are less of a person.

Here is the truth: Cannabis prohibition and cannabigotry have always been part of a white supremacist project, its oligarchic architects and supporters seeking to turn working people of different colors against each other to the great and lasting advantage of capital. The Biden Administration sustains and invigorates this white supremacist project by breaking its word to its staff.

As we march on towards legalization, we must also achieve normalization. We should condemn the Biden Administration’s betrayal and stand in solidarity with people wronged by cannabigotry.