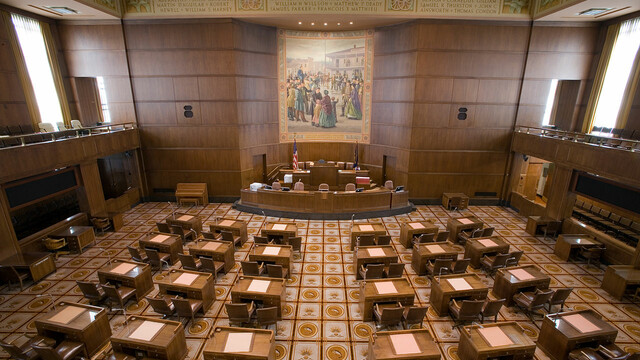 Oregon Senate Bill 1057 provides the Oregon Liquor Control Commission (“OLCC”) with additional authority to enforce Oregon’s existing recreational and medical marijuana laws, including authority to prevent the illegal transfer and diversion of marijuana from OLCC licensees, issue letters of reprimand and proceed with investigation of former OLCC marijuana licensees, and oversee marijuana labeling regulations. The bill also requires persons with a financial interest in a marijuana business to submit financial information to the OLCC, and provides the OLCC and the Department of Revenue with access to a database of Oregon Medical Marijuana Program registrants compiled by the Oregon Health Authority. The legislation also increases the number of OLCC commissioners from five to seven, one of whom must be from eastern Oregon, and one of whom must be from western Oregon, and prohibits more than four OLCC commissioners from being of the same political party.

Signed by Governor Brown in April, Senate Bill 863 requires all recreational cannabis retailers to destroy any “information [in the retailer’s possession] that may be used to identify a consumer.” Additionally, the legislation prohibits marijuana retailers from recording or retaining any information that may be used to identify a consumer in the absence of informed consent by a consumer, and a marijuana retailer is prohibited from transferring any information related to consumer identity to another person. This bill was enacted in response to concerns of a federal government crackdown under the Trump administration, as lawmakers were concerned that federal officials would have access to information that would enable prosecution of Oregon cannabis consumers.

While marijuana dispensaries and retailers must be located at least 1,000 feet from schools under existing state law, under Senate Bill 319, local governments will be allowed to deviate from this requirement by enacting a local ordinance that allows for placement of a medical marijuana dispensary or retailer within 500 feet of a public school, provided there is a “major physical or geographic barrier separating the two facilities.” Senate Bill 319 prohibits local jurisdictions from allowing marijuana dispensaries and retailers to be located within 500 feet of a public or private school, even in the event that there is a major geographical or physical barrier between the school and the dispensary. With the passage of Senate Bill 319, local governments will only be allowed to permit marijuana dispensaries and retailers within 500-1,000 feet of a school, provided there is also a major physical or geographic barrier between the school and the marijuana retailer or dispensary.

Senate Bill 302 removes criminal offenses, penalties, defenses to crimes, and procedural provisions related to marijuana from the Uniform Controlled Substances Act and transfers these provisions to the Control and Regulation of Marijuana Act. The legislation also reduces criminal penalties for possession of marijuana in an amount four times the legal limit, and increases the penalties for possession of marijuana in an amount greater than 16 times the legal limit. The bill also repeals criminal penalties for the possession, manufacture, and/or sale of marijuana within 1,000 feet of a school, and establishes a new criminal offense of committing arson while manufacturing cannabinoid extracts. The legislation also clarifies whether specific provisions of the controlled substances statute do or do not apply to cannabis and cannabis-derived products.

House Bill 2197 allows the Oregon Department of Revenue to enter into agreements with federally-recognized Indian tribes for purposes of providing tax rebate payments associated with the sale of marijuana items processed and/or produced on tribal lands. The amount of the tax rebate will be calculated based on the estimated tax revenue derived from the sale of marijuana items produced and processed on tribal lands.