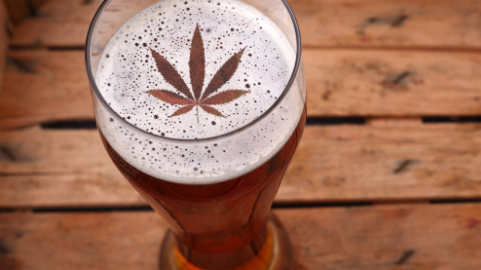 Recently, the OLCC decided to officially ban CBD-infused alcoholic beverages, including beer. This should come as no surprise to anyone following the beer industry. Beer (and other alcoholic beverage producers) are regulated both at the state and federal level. The federal entity responsible for overseeing the manufacture, labeling, and product safety in the beer industry is the Alcohol and Tobacco Tax and Trade Bureau (the “TTB”). Any brewery that desires to produce and sell beers must get a state alcohol license and a TTB permit.

For our purposes, we will mostly be discussing “beer” which is defined in the IRS code as fermented from malt or malt substitutes and containing more than 0.5% alcohol by volume (27 CFR § 25.11) and in the Federal Alcohol Act as fermented malted barley AND hops (27 CFR § 7.10). Different regulations apply for the purposes of taxation, labeling, and formula approval. Formula approval for “beer” as described in the IRS code is required if, among other things, fruit, honey, herbs, spices or “other food materials” would be added to the beer (27 CFR § 25.55). Basically, if anything other than malt (or a malt substitute) and hops are added to beer, the TTB will have to approve the formula for the product before the product can be sold.

Since cannabis (including hemp) and cannabis-derived isolates, terpenes, and esters and other aroma compounds are neither malt, malt substitute, or hops (or derived from hops), TTB will require formula approval to add the cannabis product to the beer.

The TTB has long taken the stance that CBD (and other cannabis-derived products) do not belong in alcoholic beverages. Initially, the declared policy of TTB was that cannabis was a controlled substance, and therefore could not be included in a federally-regulated product. After the approval of the 2018 Farm Bill, the TTB is working on updating its guidance to allow for more hemp products in alcoholic beverages. However, as TTB relies on the FDA for food-safety requirements, and the FDA has explicitly banned CBD additives in food products, the TTB has also stated that formulas including CBD will be rejected. Until further work can be done to prove the safety of CBD-infused food products at the federal level, it is unlikely that CBD (or THC)-infused alcoholic beverages will be legally produced in the US.

The TTB is currently referring to the FDA for approval of all hemp-derived additives to beer and other alcoholic beverages. Currently, any additives other than hemp seeds or hemp oil (the only generally recognized as safe hemp products according to the FDA) will be rejected by the TTB because they are not generally recognized as safe by the FDA. There may be a path for the FDA to approve hemp-derived ingredients through a premarket review and approval process, but that would need to be done prior to the application for formula approval by the TTB, which while possible, may drag out the formula approval process.

However, not all beverages are regulated by the TTB. Some types of non-alcoholic beers may be produced on a brewery premises, without formula approval by TTB. However, FDA regulations would apply, as well as state food safety and labeling regulations.

This has led to a relatively new innovation in ingesting a variety of cannabinoids – the non-alcoholic THC or CBD-infused drink. Some manufacturers are producing what is essentially a non-beer CBD-infused drink, which will likely not subject those manufacturers to TTB requirements, although FDA regulations will still control. If the manufacturer is located in a state that explicitly allows the addition of hemp products to food and beverage products, then this product is on firmer ground, at least at the state level. It remains to be seen if the FDA will countenance the interstate sale of these products.

Finally, there are also breweries, particularly in California and Oregon, that are introducing CBD and/or THC into non-beer beverages produced on-site. There are risks to introducing THC onto a federally-licensed brewery premises, but there is at least one California brewery that is attempting it within the state of California (they may not be making the actual product on the TTB permitted location – the brewery is next door to a cannabis company). In addition, at least one Oregon brewery claims that they are using a propriety blend to introduce CBD into an alcoholic beer that keeps the beer on right side of the regulations[1]. One brewing company in Colorado claims to have the only TTB-approved alcoholic CBD-infused beer formula, but given that the TTB has stated that it will not be approving formulas with CBD as long as the FDA disapproves of the addition of CBD to food products, it is unlikely that other breweries will be able to get the required TTB formula approval. The fact that some breweries are producing CBD-infused beers currently, either in Oregon or in other parts of the country does not, in-itself, prove that CBD-infused beers are currently legal.

In conclusion, there are a lot of opportunities that could be opened up in the next few years to really tap into the craft heart that both cannabis and craft brewing share, but there are going to be some regulatory hurdles to overcome to ensure that the products, and the process are approved.

[1] For the editor – the claim that Coalition Brewing is making is that they are using a blend that is not subject to the CSA. My guess is that they are getting the CBD from parts of the plant that the CSA does not classify as marijuana (i.e. the stems, mostly). But there are no COLAs filed for this beer, and I would be willing to bet no federal formula approval, so their ability to sell across state lines would be limited.