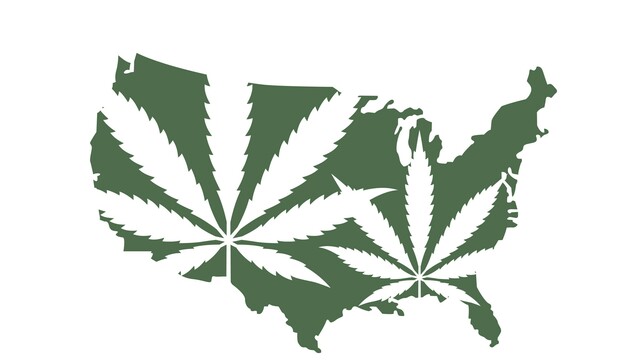 Cannabis legalization in some form or another is legal nearly everywhere in the US.  As of August 2021:

Recently, Democratic Senators Chuck Schumer and Cory Booker circulated a draft bill to legalize marijuana in the Senate. The Democrats control the House while the Senate is split 50/50 between Republicans and Democrats. However, the tiebreaker is Democratic Vice President, Kamala Harris.

According to Forbes,  Schumer said at a recent press conference that, “We don’t have the votes necessary at this point. But we have a large majority of our caucus for it. We’re going to show it to the others and say, ‘Well, what don’t you like? What do you like? And we’ll see if we can get the support.’ We’re going to put our muscle behind it, all our effort behind it, and we’re going to get this done ASAP.”

It may seem perplexing as to why the Senate’s top Democrat is concerned about getting enough votes to move his proposed draft bill forward. Senate rules require just a simple majority to pass a bill, but procedural steps along the way require a supermajority of 60 votes to end debate on bills. This brings us to what makes Sen. Schumer state that he does not currently “have the votes” for his proposed cannabis legislation: the filibuster.

A filibuster is long-established tool (dating back to ancient Rome) that allows a lawmaker to slow down or block other lawmaker’s bill, resolution, or amendment from getting a vote by talking as long as they want. The debate can theoretically go on forever, blocking any final vote and essentially killing the bill, resolution, or amendment from advancing.

The filibuster is a powerful tool and to understand why, you first need to understand how the legislative process works in the Senate. Here is a helpful breakdown from Congress.gov:

To consider a bill on the floor, the Senate first must agree to bring it up – typically by agreeing to a unanimous consent request or by voting to adopt a motion to proceed to the bill, as discussed earlier. Only once the Senate has agreed to consider a bill may Senators propose amendments to it.

Perhaps the modern Senate’s defining feature is the potential difficulty of reaching a final vote on a matter. Most questions that the Senate considers – from a motion to proceed to a bill, to each amendment, to the bill itself – are not subject to any debate limit. Simply put, Senate rules provide no way for a simple numerical majority to cut off or otherwise impose a debate limit and move to a final vote. As a result, Senators can effectively wage (or threaten to wage) a filibuster – in effect, insist on extended debate in order to delay or prevent a final vote on most amendments, bills, or other motions.

In the 1970s, the Senate rules changed to allow Senators to trigger a filibuster simply by announcing they wanted to block a bill. This means that Senators no longer even needed to start talking to use the filibuster. As a result of this rules change, the image of a Senator orating for hours on end popularized by Jimmy Stewart in Mr. Smith Goes to Washington is a relic of the past.

PBS News Hour put together a helpful five-step breakdown of how the filibuster works in the modern Senate:

In order to pass a bill, only 51 votes are required when the full Senate is present. However, in order to get to the point where a bill could be voted on, the senators must get past the 60-vote threshold imposed by the filibuster rule. For Schumer to get legislation enacted, he would need the full support of all the Senate Democrats, plus ten Senate republicans. Mitch McConnell, the leader of the Senate Republicans, is not going to tolerate any efforts to support Senate Democrats, including a bill to federally legalize cannabis. McConnell is not opposed to all forms of cannabis. He was instrumental in legalizing hemp with the passage of the 2018 Farm Bill. When it comes to full-THC cannabis, McConnell has used the filibuster to block legalization measures.

The more realistic pathway at this point may be for the Senate to do away with the filibuster as it currently exists. There is a push to reform the filibuster, though most of that support has come from other (more important) issues, including the protection of voting rights and the investigation of the January 6th insurrection. Although many Americans and lawmakers support legalization, that has not been a reason cited to end the filibuster. However, if the filibuster is invalidated then the likelihood of marijuana legalization increases greatly. There are also budget reconciliation measures that lawmakers can take to “sidestep” the filibuster, but we’ll cover that in another post as it is too complicated to tack on to this already long blog post.

To recap, despite being an incredibly popular political issue and despite having control of the House and Senate, it seems likely that any measure to legalize cannabis offered by Democrats is doomed to fail due in large part to the filibuster. If you are interested in contacting your congressional representative about marijuana, Norml has a webpage to do just that.